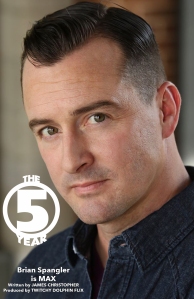 What led me to acting and why film?

I took an acting class in the senior of my undergraduate years at Ohio University as a prerequisite in the Marketing/Sales program at the business school. Little did I know that I would fall in love with it. I put it on the “back burner” for a couple years after graduation but the acting bug pulled me back to it for some small, local, short film out of Columbus, OH when I was about 25 years old. After that, I got my hands on any and every acting experience I could from theatre to improv to commercials to film. Film has always been a magical arena where I can take all of my entertainment experience and bottle it into one moment, character or scene that is forever recorded with all of the technical tricks of the trade. I love the theatre and film for their own particular rushes as an actor but film has a special place for me. I grew up watching a lot of television shows and film as a kid. It distracted me from my current situation and allowed me to believe in another place and time where anything was possible. I wanted to create those situations for other people to be distracted from the problems in their lives. So I continue to entertain. I continue to create characters in the hopes that it takes someone out of their reality and just enjoy that moment in time.

What actors inspire you?

I have to break this down into a few areas:

Why did you decide to do The 5 Year?
Well, I’ll be brand new to the Austin and Texas area in general (moving from Columbus, OH for a job opportunity) and I knew James from a few film festivals. James was kind enough to find a role that fit for me in the film. I always wanted to work with the Twitchy Dolphin team and now I have the opportunity. I’m looking forward to working with the team!
Top 10 movies of all time? (in no particular order)
1. Anchorman
2. Blazing Saddles
3. Toombstone
4. Roadhouse
5. Goodfellas
6. Inglorious Bastards
7. Superman (the original with Reeves)
8. Tommy Boy
9. Big Lebowski
10. Bronson